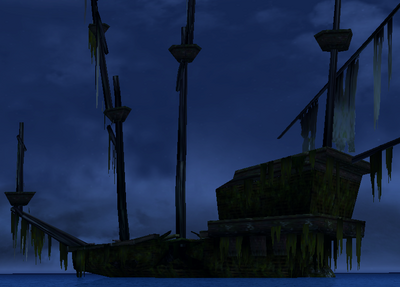 The Harkaway is the alleged name of Jolly Roger's flagship.

It is a three-masted war frigate. It is unknown where Jolly Roger first came into the vessel's possession, either raising it from the depths like many of his skeleton fleet or perhaps the ship simply became cursed like its ill-fated master.

When the pirate escapes from the Rambleshack jail, the flagship appears and captures Bo Beck's ship - the Grim Reaper - which was fleeing the island, while Jolly Roger turns Bo Beck into a skeleton. As the player is thrown into the water, the Harkaway fires Firebrand rounds at the Reaper, knocking down the masts of the ship first and then sinking the vessel with an Explosive shot. 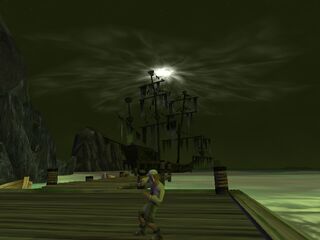 When Jolly's forces attack Port Royal, Tortuga or Padres Del Fuego, the Harkaway arrives first under a dark rolling cloud. The ghostly ship pulls up to the dock to let Jolly's crew attack. However, his minions appear to go over the side and walk their way to shore

In the fall of 2008, a Marceline Guild pirate named Sir Victor Mayhew told of a Harkaway ship coming soon. This was probably a hint of the Invasions, in which the flagship of Jolly Roger was to lead, while the undead troops storm down into the beaches of the attacked islands. The ship itself doesn't attack any targets, but instead waits for either a Victory or Loss of Jolly Roger, in which case it takes off and leaves the targeted island.

Although the ship's sails are ragged and appear nonfunctional, the ship moves fast and stealthfully quiet, similar to the Black Pearl. The ship also has the ability to teleport to other places, emerging from supernatural fog and blue and green lightning. It is unknown if Jolly Roger uses his own powers to teleport it or if it is part of the ship's nature. It has been seen that the ship is armed with Firebrands, it is assumable it also fires Fury and Thunderbolt supernatural rounds.

Retrieved from "https://piratesonline.fandom.com/wiki/Harkaway?oldid=338204"
Community content is available under CC-BY-SA unless otherwise noted.