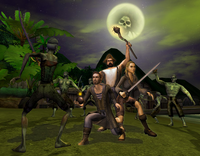 Halloween or All Hallow's Eve is a notorious time to the inhabitants of the Caribbean, due to Jolly Roger's rather morbid holiday tradition of casting a curse over the citizens and pirates of the islands!

During this time, pirates who stay outside during the full moon are transformed into the undead (Curse of the Muertos Moon or Curse of the Dead Moon), and compelled to attack their fellow pirates and cause havoc around the Caribbean.

Of course, being pirates, most of the "victims" of the curse saw it as opportunity to swashbuckle, plunder and pillage even more than usual.

Halloween also marks the birth anniversary of the game and the developers added other events in addition to the Curse - which gave way to all-new features such as deadly Invasions by Jolly Roger's forces.

See Also: Curse of the Muertos Moon and Friday the 13th

The Zombie Dance is a freaky dance that you can perform during October. This is a popular dance made by pirates to celebrate the month of October and the scary holiday of Halloween. You can perform this dance by typing /zombie or going to the emotes tab to try your skills at the "Zombie Dance".

The Zombie Dance was inspired by the dance number in the video for Michael Jackson's Thriller. In the video, recently raised from the dead creatures dance in the street with a zombified Jackson.

Retrieved from "https://piratesonline.fandom.com/wiki/Halloween?oldid=328598"
Community content is available under CC-BY-SA unless otherwise noted.