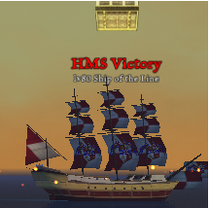 The HMS Victory is a Level 79-82 Boss Ship of the Line. It has only been encountered so far in Royal Navy Treasure Fleets, along with Navy Elites. It attacks with Firebrand for Cannons and Explosive for Broadsides. They have tremendously thick hull armor. They can engage targets from fairly long range and are surprisingly fast and agile for their size, and can travel with no sails. Currently, these ships have only appeared as part of Treasure Fleets and have no permanent patrol routes. Explosive broadsides make this ship one of the strongest enemy ships in the game!

The name of this ship seems to come from its real life counterpart, the HMS Victory, a magnificent British Royal Navy Ship of the Line armed with 104 cannons that still exists today and now sits in drydock in Portsmouth, England. The HMS Victory is the only surviving Ship of the Line in existence.

Retrieved from "https://piratesonline.fandom.com/wiki/HMS_Victory?oldid=324122"
Community content is available under CC-BY-SA unless otherwise noted.