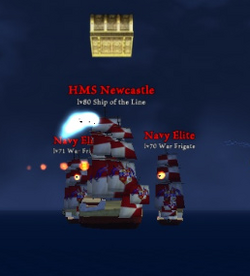 The HMS Newcastle is a nearly unstoppable Navy Ship of the Line. It has shown up in the Royal Navy Treasure Fleets. It is always surrounded by the Navy Elite heavy warships. The vessel has appeared at Levels 79-81. They unleash powerful broadsides of Firebrand and shoot Chain Shot from the deck cannons. They have tremendously thick hull armor. They can engage targets from fairly long range and are surprisingly fast and agile for their size, and can travel with no sails. Currently, these ships have only appeared as part of Treasure Fleets and have no permanent patrol routes.

Note - There were 8 ships in the Royal Navy that bore the name, HMS Newcastle. They were named after a town in England named Newcastle.

The motto of these ships is "Fortitudino Vinco" - (I conquer through strength), so it is believed the Ship of the Line has the same motto.

Retrieved from "https://piratesonline.fandom.com/wiki/HMS_Newcastle?oldid=324120"
Community content is available under CC-BY-SA unless otherwise noted.