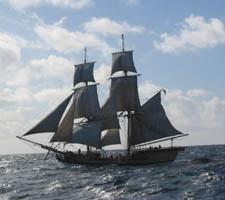 The HMS Interceptor was a brig hailed by the Royal Navy to be the fastest ship in the Caribbean. The ship was once under the command of Commodore James Norrington until she was stolen by Captain Jack Sparrow and Will Turner after faux-hijacking the much larger HMS Dauntless.

Once the Interceptor had pulled alongside the Dauntless, Sparrow and his accomplice Will Turner, swung to the smaller vessel and commandeered her. Sparrow had disabled the Dauntless' rudder chain, preventing the Dauntless from turning to fire its cannons at the Interceptor, and thus saved it from being destroyed.

At Tortuga, Sparrow, with some help from his trusted first-mate and friend Gibbs, gathered a crew to man the Interceptor and hunt down the Black Pearl. At this time, Sparrow and Turner promised the ship to Anamaria, whom he owed a vessel - after stealing (and losing) hers (the Jolly Mon).

However, the Interceptor was destroyed in battle after being captured by Hector Barbossa and the cursed crew of Black Pearl. After taking Sparrow's crew aboard his own ship, a fuse was laid, leading to the Interceptor's gunpowder magazine. Trapped aboard, Will Turner barely escaped being killed himself when the ship exploded.

The Interceptor does NOT appear in the Pirates Online, but it is mentioned in the Legendary Fish lore in-game.

In terms of the movie franchise, the Interceptor only appeared in Pirates of the Caribbean: The Curse of the Black Pearl, portrayed by the real-life tall ship named Lady Washington. In the Collector's Edition, there is a featurette called "Diary of a Ship", a documentary showing the Lady Washington's 40-day voyage from Long Beach, California, to the island of St. Vincent in the Caribbean to join in the filming.

Retrieved from "https://piratesonline.fandom.com/wiki/HMS_Interceptor?oldid=315038"
Community content is available under CC-BY-SA unless otherwise noted.