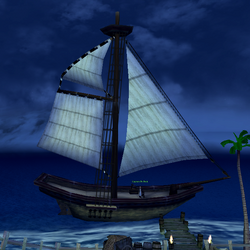 The Grim Reaper was a light sloop under the command of Bo Beck. It was supposed to deliver Jack Sparrow to Jolly Roger as part of their deal, but a new deal was forged between Sparrow and Bo Beck, so that the new pirate recruit would be taken in Sparrow's place.

The Grim Reaper was destroyed by the Firebrand broadsides of the Harkaway for its captain's betrayal of Jolly Roger.

Retrieved from "https://piratesonline.fandom.com/wiki/Grim_Reaper?oldid=324059"
Community content is available under CC-BY-SA unless otherwise noted.