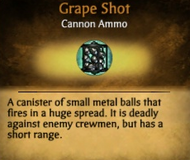 Grape Shot is a special cannon round using a load of small pellets, meant to fire like a shotgun blast. Grape Shot does damage to enemy hulls and sails. It can also slow down Ship Repair on enemy Privateer ships in SVS and can stun or sometimes even knock out gunners or the helmsman.

The skill becomes available at Cannon Level 4. Increasing the ability of this skill increases the damage done.

To use Grape shot, be stationed at a cannon and press 3 or click

. Once one round has been fired, it will take a few seconds to reload. You can improve your reload speed by using the Passive Skill Rapid Reload.