Gideon Grog is an Undead Witchdoctor Boss who's been spotted in various locations on Port Royal and Tortuga, even appearing among Jolly Roger's army during invasions. 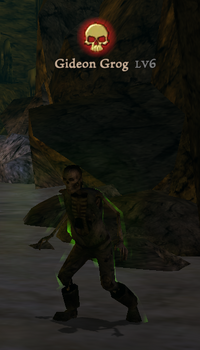 Retrieved from "https://piratesonline.fandom.com/wiki/Gideon_Grog?oldid=332640"
Community content is available under CC-BY-SA unless otherwise noted.