Ever wondered if there is a better way to loot at a boss? Well look no further! For here is a guide that will tell you the best ways and methods for defeating bosses while still getting good loot!

General Darkhart is one of the most well-known bosses in the game. He will drop Crude, Common, Rare, Famed, and even Legendary items; although he does NOT drop Cursed Blades and most Sailing Items. The only exception to Sailing items are the Old Cannon Ram, and Crude and Common Sailing Charts. A few good ways of looting at this boss are the following: 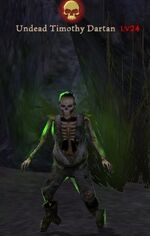 Undead Timothy Dartan is not as well known as General Darkhart, but he is a great looting boss for people who are lower level. Just because he is good for lower levels does not mean he gives worse loot. Dartan gives just as good loot as General Darkhart does. Some Methods of killing him are: 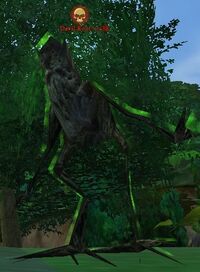 Devil Root is an extremely strong Stump Boss. He is not very well known for his good loot although, he has had some good loot drops lately. He is located on Outcast Isle. Be careful though! Devil Root can easily kill a single pirate under Notoriety Level 40.

Using a Gun: Using a gun such as a Blunderbuss or Repeater Pistol, Guns such as the Gorilla Blunderbuss are good for Devil Root because they prevent you from being knocked down.

Using a Sword: I would suggest not using a sword unless you are with a group of 3 or 4 high level pirates due to the fact that he can knock you down during combat. Swords such as the Behemoth Blade and Gorilla Cutlass do however have a Sure Footed skill that prevents you from being knocked down.

Using Grenade: Using Grenade is not reccomended because you damage yourself when you use it, but some pirates prefer it.

Nebal the Silent is an EITC Assassin Boss located in Beckett's Quarry. He appears at levels 28-35 and can be very deadly to all levels. To battle him, it is best not to go alone, at the very least have 2 pirates to battle him if you do not have strong weapons.

Sword: Using a sword is the most preferred method between pirates because it deals the most damage out of all of the available weapons to use.

Throwing Knives / Dagger: Using throwing knives and/or a dagger is the second most popular method because of the damage they can deal over time.

Doll: A Voodoo Doll is only really good for cursing and then using a different weapon to finish him off. If you are running low on health, Life Drain is also a good skill to use.

Staff: A Voodoo Staff really isn't a good choice for Neban unless you are with a group of people, using a staff that has the Dark Aura skill would be helpful to everyone around you.

Please Note: Because Neban is an EITC Boss, he cannot be damages by any type of gun, although if you are using a bayonet, you can damage him with Bayonet Stab. 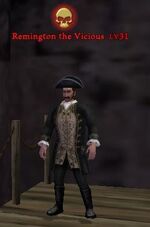 Remington the Vicious is an EITC Assassin Boss loacated in the fort on Kingshead. He appears at levels 28-35 just like Neban the Silent. He is just as Deadly as Neban the Silent, almost identical in fact. You cannot attack him with a Gun because he is EITC. 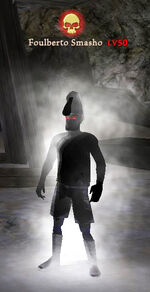 Foulberto Smasho is an extremely hard boss to defeat. He has nearly a quarter of a million health. To defeat him, you will need at least 2 level 50 pirates with strong gun skills and doll skills. 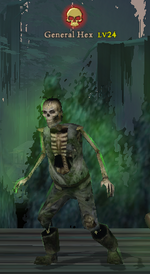 Retrieved from "https://piratesonline.fandom.com/wiki/General_Warhawk%27s_Guide_to_Looting_at_Bosses?oldid=268458"
Community content is available under CC-BY-SA unless otherwise noted.