Welcome to the world of PvP!

For anyone that is new to the game, PvP stands for Pirate vs. Pirate, or Player vs. Player. It is a Mini Game where you can battle against your friends and guild mates. There are 7 different ranks in PvP, Novice (no rank yet), Rookie, Brawler, Duelist, Buccaneer, Swashbuckler, War Dog, and War Master. Below shows how much infamy you need to get to each rank:

To level fast in PvP, all you have to do is farm, farming in pvp is basically having people stand around in a group while you shoot them, or use a sword, etc. Much like in the picture below: 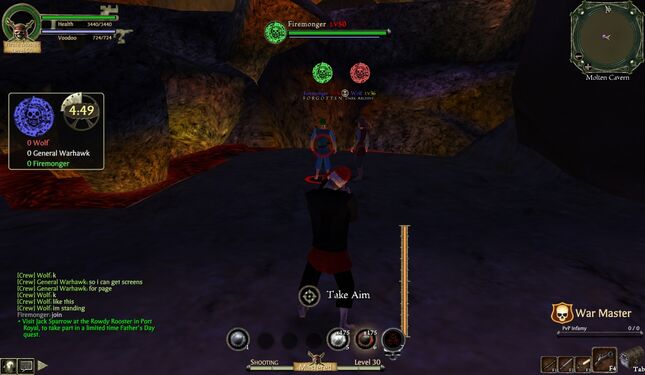 Hint: I have come to the conclusion that both Silver and Steel Shot deal the same amount of damage in PvP if they are trained the same.

Through a lot of calculating, I have figured out the maximum amount of infamy you can gain per game using this method.

Please note that the maximum allowed people per game is 10. One person being yourself, you cannot go past 9 people being farmed.

When choosing a weapon for this, you need to put into consideration that you want to attack more then one person at the same time. Some people, like me, use a Blunderbuss. Ones such as the War Scattergun or Grand Blunderbuss.

Others use Siege Charge, a skill on Grenades. If you choose to use this, be careful! You can deal damage to yourself and could also kill yourself! Then you get no Infamy.

Broadswords are also popular. Broadswords can kill a group of level 50's almost as fast as a Blunderbuss can. If you have a Broadsword such as the Gorilla Broadsword, it has a skill that raises your strength for a certain amount of time, which could come in handy with a large group of people. </div>

Retrieved from "https://piratesonline.fandom.com/wiki/General_Warhawk%27s_Guide_to_Leveling_PvP!?oldid=301782"
Community content is available under CC-BY-SA unless otherwise noted.