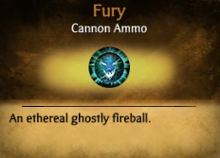 Fury is the most powerful medium-range cannon ammunition available in the game. The rounds are actually balls of blue ghostly energy, not metal. They are best-suited against ship hulls.

This special round becomes available at cannon skill Level 20. Increasing this ability increases the overall damage done. Fury rounds can be purchased at any gunsmith for 20 gold per 25 rounds.

To use a Fury Round, get a cannon and press 7 or click

Below is a table of Cannon Damage for Fury:

In Ship PvP, fury rounds fired directly at a ship's water line do the most damage. Also, firing indirectly at gunners can disorient them, decreasing their aim. The Revenant Cannon Ram, which has unlimited fury, is a favorite in Svs.

With Ship Customization, when pirates reach Rank 4 Hull Upgrades, they can choose between 5 different upgrades. One of these upgrades is the Skull & Bones upgrade, which gives the ship a 15% chance of a cannonball fired out of a broadside, to be Fury. If a pirate chooses to progress to Rank 5 or 6, they will have an even higher chance of Fury broadsides.

Retrieved from "https://piratesonline.fandom.com/wiki/Fury?oldid=322654"
Community content is available under CC-BY-SA unless otherwise noted.