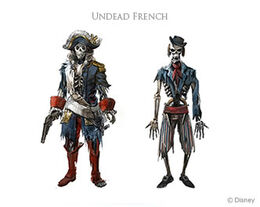 Beware, they use their fencing foils in a different style than traditional cutlass attacks. It is a beautiful, but deadly type of fighting - even using martial art kicks!

They can be found on Isla Cangrejos or on the High Seas around the island on their flagships.

Game Note - These levels can vary on Flaghips as the levels of enemies on flagships change depending on you and your crew's notoriety level.

The French have hoisted their sails again when Jolly Roger brought their vessels back from the depths.

These can be found sailing around Isla Cangrejos, attacking all who come close.

Jacques le Blanc, the fearless leader of the French Undead in the service of Jolly Roger