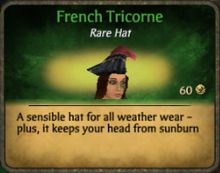 The French Tricorne is a rare hat that is a symbol of the French leadership with its feathered plume. It is only available for purchase from the privateer merchants on the privateer islands and Devil's Anvil. It may only be purchased if you are a Commodore in SvS Infamy.

This is a French hat, which represents the French Captain. It is also the hat worn by Pierre Le Porc himself.

Retrieved from "https://piratesonline.fandom.com/wiki/French_Tricorne?oldid=340450"
Community content is available under CC-BY-SA unless otherwise noted.