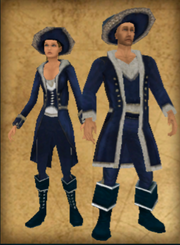 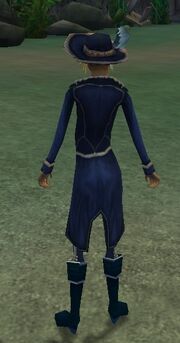 French Privateer is an outfit offered for purchase by peddlers on Padres Del Fuego, Cuba, Port Royal, and Tortuga. Peddlers offer special featured clothing for a limited time (usually 2 months). Both versions of this outfit (male and female) include a long blue coat with white trim, a blue ostrich hat that has an intricate design, blue breeches and blue privateer boots to complete the outfit.

Game Note: This outfit first appeared in The Legend of Pirates Online in December of 2017. It was released with the new Winter Mystic outfit.

Retrieved from "https://piratesonline.fandom.com/wiki/French_Privateer?oldid=332611"
Community content is available under CC-BY-SA unless otherwise noted.