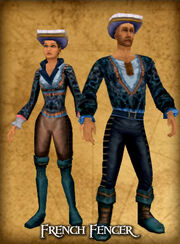 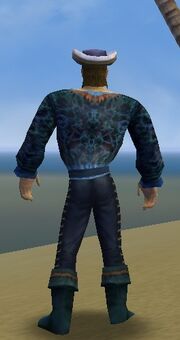 French Fencer is a matching outfit offered for purchase by the Peddlers on the main islands Padres Del Fuego, Cuba, Port Royal, and Tortuga. Peddlers offer clothing that will only be available for a limited time. Because of this, it is a good idea to buy the clothing as soon as possible. This outfit was released on the Test Server on October 2010, but was released on the live servers on October 2011. Peddlers began to sell them shortly after they robbed them from trading ships that were anchored off of Ile d'Etable de Porc. The outfit was additionally leaked the morning of October 1st, and again in the evening on October 23rd.

Retrieved from "https://piratesonline.fandom.com/wiki/French_Fencer?oldid=323964"
Community content is available under CC-BY-SA unless otherwise noted.