Francis Faust is an Undead Duelist Boss and part of Jolly Roger's undead army. Francis is a random boss, appearing wherever Undead Duelists may appear and is one of the original bosses from Pirates Online. He has even appeared during Invasions.

The name Faust could be a play on the literary character Faust who makes a pact with the Devil to learn all the world's knowledge and pleasures in exchange for his soul. 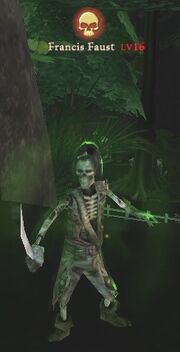 Retrieved from "https://piratesonline.fandom.com/wiki/Francis_Faust?oldid=332646"
Community content is available under CC-BY-SA unless otherwise noted.