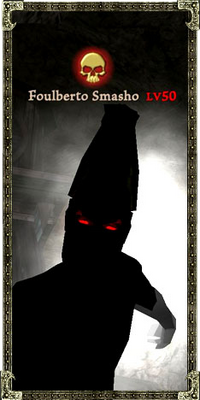 Foulberto Smasho is a truly terrifying boss. He can be found in the Cave of Lost Souls on Raven's Cove. He is extremely powerful, and is even tougher than El Patron and Devil Root combined. He always appears at Level 50 (237,500 health points). He can be defeated, though it will take time and a large crew, plus some tonics... Up close, Smasho appears to be wearing a Navy Chapeau hat. This boss took the place of El Patron for most powerful boss. He attacks with a Dagger. Foulberto's popularity skyrocketed when his drops were fixed to reward ONLY throwing knives, making it not so rare to get a Famed or a certain set of Legendary Throwing Knives.

Foulberto does not possess any kind of powers other than very powerful dagger and throwing knife attacks. It should be noted that Foulberto tends to miss often, but usually one or two hits can kill a level 40 pirate, making fighting him incredibly frustrating, not to mention time consuming.

Considering his level, his power, and his health points, he is probably the second most dangerous enemy in the game. It is unwise (even if you are level 50) to attack him alone.

Foulberto was a very short tempered crew member aboard El Patron's Ship. When they ran aground on Raven's Cove, El Patron's crew mutinied with Foulberto leading the violent revolt. During the mutiny, Foulberto was able to escape through a small tunnel with a few of his strongest men and a large cache of weapons, mostly throwing knives, in tow.

El Patron was not about to let the leader of this mutiny escape so easily and with such a large stash of Rare and Legendary weapons at that! El Patron swiftly ordered that the tunnel entrance be sealed and personally cursed Foulberto and his mutineers to remain inside forever, trapped in the afterlife.

Like many things in the Caribbean, men with a vengeance never forget. Foulberto returned in spirit form fueled by rage against El Patron and any mortal he perceives to be allied with his rival.

In an effort to break out of the cave, Foulberto consumed the souls of other crewmembers trapped in the mine but alas the curse placed on him was too strong. The only result of his violent outburst was to knock down a couple walls thus exposing the new cave to outsiders. His entrapment only serves to feed his anger and ultimately has made him into the red-eyed, dark spirit you see today.

Foulberto knows his strengths are unrivaled. however, being bound for eternity to remain within the walls of this cave, he can do nothing more but lure passers-by inside and smash the souls of those weaker than him. He has since been dubbed, "Foulberto Smasho" and has quickly earned a spot as one of the most feared adversaries in the Caribbean. Are you willing to step up to the challenge?

Retrieved from "https://piratesonline.fandom.com/wiki/Foulberto_Smasho?oldid=342201"
Community content is available under CC-BY-SA unless otherwise noted.