Forts are defined as a building or group of buildings with strong defenses, usually strategically located, guarded and armed with cannons for its defense.

In Pirates Online, two of the four main settlements has a Royal Navy fort, they serve as the main defense of the town as they have a high concentration of soldiers and some EITC soldiers for hire. They can be identified by their high stone walls and parapets. There are three known forts. Fort Charles, Fort Dundee, and Kingshead. 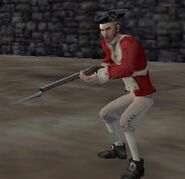 Though forts are surrounded by high stone walls, they also have soldiers guarding their entrances. At Fort Charles, these perimeter sentries are lowly cadets and guards. But, Fort Dundee and Kingshead have more seasoned veterans and even officers by their entrances.

In the fort, soldiers are barracked in larger numbers. Their superiors can also be found here, along with some EITC Black Guard in the case of Fort Charles and Kingshead.

The commander of each fort has a small office located somewhere, deep inside the structure. This area is harder to reach and usually well-guarded; which can make obtaining quest objects (like warrants, secret orders, etc.) fairly tough.

The top part of fort is where cannons would be mounted to fight off attack from incoming ships. On all forts, the soldiers guarding this area are tougher than the guards at the entryway.

In addition to these structures, the Royal Navy and EITC maintain several other bases of operation around the Caribbean.

In the boss battle, to prevent the Black Pearl from escaping, there are numerous forts on each side blocking the way out each with it's own Cannon Towers.

Retrieved from "https://piratesonline.fandom.com/wiki/Forts?oldid=322505"
Community content is available under CC-BY-SA unless otherwise noted.