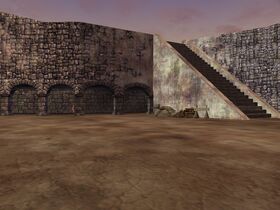 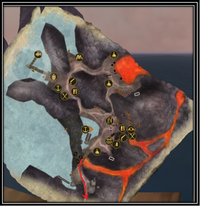 This stronghold of the Royal Navy on Padres Del Fuego is on the far end of the island from the main dock. It is home to a fairly seasoned group of Sergeants, Veterans, and a couple of Officers. Unlike the other Forts, you don't have to enter a door to access Fort Dundee.

The Jail was once located inside Fort Dundee, but now is outside of the fort near the entrance with a lone Veteran.

Overlooking the Boiling Bay, a pirate may find themselves here as part of a quest. A small office can be found inside the fort from the main courtyard, and at least one quest will require a pirate to venture in there.

Also, Sam, a boss veteran, has been reported here.

Recently a new Cannonmaster named Rusty McGinnis has been assigned to work the Cannon Defense just outside the main gate.

The Navy keeps a large garrison of troops here due to the growing issue with pirates, the invasion of Jolly Roger's undead army and to supply men to Beckett's Quarry.