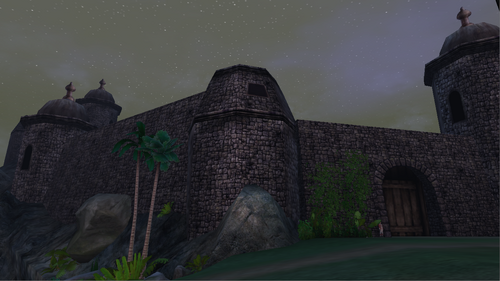 Sitting high on a hillside on the island of Port Royal, is the imposing stone structure Fort Charles. The monolith of British military might looks down onto the harbor and the town below.

Her wall-mounted cannons are meant to protect vessels coming into or out of the harbor. But, they were unable to protect the citizens from the wrath of Hector Barbossa and the crew of the Black Pearl as they laid siege to the port, in search of the last coin from the cursed Aztec treasure of Cortez.

The fort is also where major island events are held, such as the promotion of James Norrington to the rank of Commodore or the attempted hanging of Captain Jack Sparrow.

Black Guard members can be found here, too. They are stationed at the overlook where the alarm bell is mounted. This is where pirates can prove themselves worthy as well.

While there are no permanent bosses stationed in Fort Charles, random bosses may appear from time to time.

A pirate can play Cannon Defense, a mini-game using cannons to defend the town from raiding bandit ships.

Just past the main gate, there is a Cannon Defense stand and Cannonmaster Bert Calledougal. To play the mini-game, simply walk up to Bert and press Shift.

Pirates will visit this fort quite often early on Story Quest: The Black Pearl Crew, to find components for illegal weapons, contraband voodoo dolls, or to meet with imprisoned pirate Gordon Greer.

There are other random quests that will require coming here: 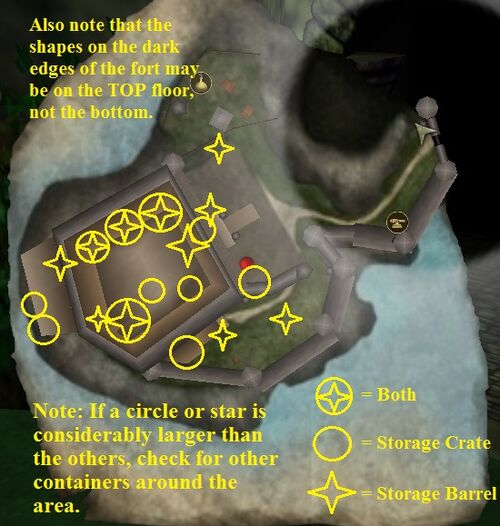 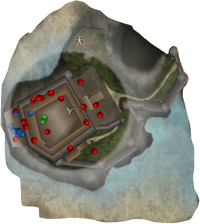