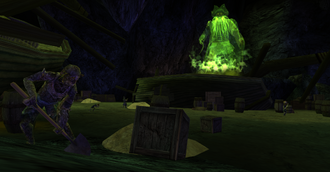 Forsaken Shallows is a new area in The Legend of Pirates Online located on Isla Tormenta within Cursed Caverns. This area was released on March 24, 2018 alongside multiple new items. A unique track plays while in this area.

A ghostly projection of Davy Jones can be seen watching over things, similar to that of Jolly Roger in caves such as Murky Hollow. The entrance to Forsaken Shallows can be found in the Thrall Room.

It appears that Davy's crew are actively digging for something, but sometimes they just stand there holding a shovel like a sword.

Below is the soundtrack exclusive to Forsaken Shallows..

A new enemy type called a "Spout", a powerful voodoo practitioner that had been shanghaied into service on the Flying Dutchman, is exclusive to Forsaken Shallows. 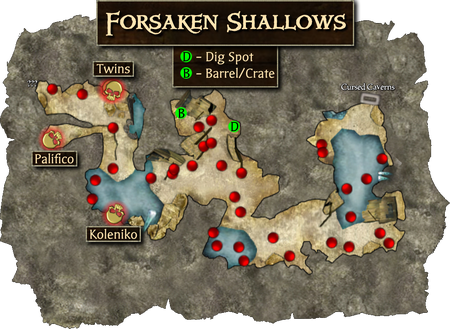 Retrieved from "https://piratesonline.fandom.com/wiki/Forsaken_Shallows?oldid=338149"
Community content is available under CC-BY-SA unless otherwise noted.