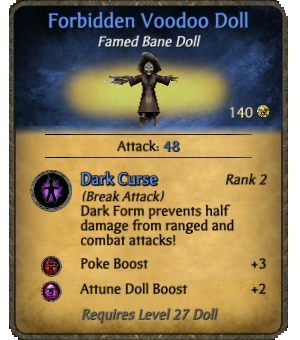 The Forbidden Voodoo Doll is a very powerful famed bane doll introduced during the 2017 Halloween Update. This doll's wielder gains a nice-sized Poke boost, as well as two other notable bonuses: this doll grants a Dark Curse Break Attack, which, when activated, will halve the damage of incoming ranged and melee attacks, as well as a +2 Attune Doll boost, which allows your doll to attune two extra targets at once!

Retrieved from "https://piratesonline.fandom.com/wiki/Forbidden_Voodoo_Doll?oldid=340118"
Community content is available under CC-BY-SA unless otherwise noted.