Everybody has to eat and for a pirate, this is also true.

However, currently in Pirates of the Caribbean Online, there is not a regular equipment version of food. It is assumed that the pirate eats aboard his ship or in towns, since their health regenerates automatically.

Long trips at sea meant that food had to be specially made to withstand the elements and still be edible. Fresh vegetables, meat that was not salted or cured, and fruit would last less than a week.

Sailors often ate hardtack biscuits, meat jerkies (the term buccaneer came from meat makers in the Caribbean), and other dry goods. However, some ships galleys would carry live poultry for their eggs and fresh turkey or chicken meat. Barrels of watered rum mixed with fruit juice (grog) would protect from scurvy.

On special occasions (like the Founder's Feast) food is offered for the pirate. Normally, this is in the form of roast pork or some items offered during a holiday party. To eat, the player simply presses the T key as they would when drinking tonics.

Any lost health, up to 2000 points, is recovered instantly. 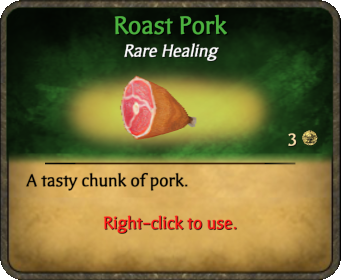 You can get this pork during events like the Founder's Feast around Thanksgiving and Mardi Gras .

In Chat, a player can enter /food, /eat, or /drink and the chat will display "Pirate munches on some food" or "Pirate pours a drink". Also /vittles or /thirsty will indicate that the pirate is looking for food or a drink. There is no animated emote response to this.

Retrieved from "https://piratesonline.fandom.com/wiki/Food?oldid=331164"
Community content is available under CC-BY-SA unless otherwise noted.