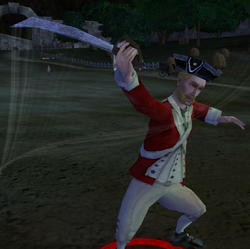 Flurry is a triple-hit cutlass move used by certain enemies. Flurry looks exactly like Eviscerate (a dagger combo move) when used. The attacker will do a quick series of three slashes, that go in a figure 8 formation. This is an effective attack that can deal significant damage. It is also used by some of the bosses.

Note: Many different enemies use this skill, including Navy, EITC, & Ghosts.

Retrieved from "https://piratesonline.fandom.com/wiki/Flurry?oldid=323938"
Community content is available under CC-BY-SA unless otherwise noted.