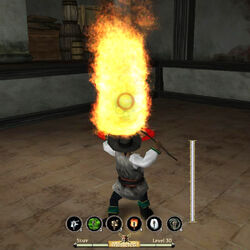 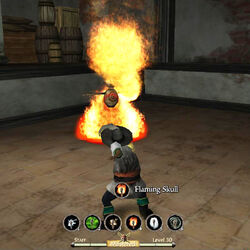 Flaming Skull is a scorching Voodoo Staff hex. When used, it is a line-of-fire attack with devastating results. The caster creates an imposing-looking skull of fire over the staff head. Once fully-charged and released, the Flaming Skull flies at enemies directly in front of the caster, damaging all it touches and burning them.

It does take noticeably longer to cast, so trying to use it while being attacked can prove risky. Increasing this ability increases the amount of damage caused by the skull and increases the duration of the burning, doing more damage every second the victim is burning.

*Note that Cast Time does not account for Spirit Lore. The listed Cast Time is when the Spirit Lore is rank 0.

To use Flaming Skull, have your staff drawn and press 4 or click

Retrieved from "https://piratesonline.fandom.com/wiki/Flaming_Skull?oldid=322922"
Community content is available under CC-BY-SA unless otherwise noted.