To maintain control and impose influence in the Caribbean, the Royal Navy and East India Trading Company have vessels that command groups of ships or have special duties to protect particular areas.

Flagships are special ships in Pirates of the Caribbean Online in that they must be disabled and then boarded in order to be defeated. They will appear with a flag above their ship class and level. They may be EITC, Royal Navy, or French and Spanish ghost ships, which are the only ghost ships that are flagships.

Many high-level pirates dare to face these vessels, for they can give valuable drops, including Royal Chests, and they can give great Notoriety.

Here are some flagships that have been found

Game Note-The EITC Behemoth used to be a flagship.

All French ships can be found circling Isla Cangrejos.

All Spanish ships can be found in the treacherous waters around Cutthroat Isle.

A flagship must first be crippled in normal ship-to-ship combat, reducing the ship's hull value to 0.

Once crippled, a pirate only has 5 minutes to board the flagship. Use the ship's cannons to launch a grappling hook (Ammo Option 8) at green circles on the disabled flagship. After a hook is attached, the flagship will automatically be pulled into boarding position. Then, the captain can order the crew to board in which they will swing over to attack the ship's crew. The captain may also Parley the ship. If the captain chooses Parley, then the ship will sink and no additional cargo will be gained and you may continue on your way.

Tip - Gather a crew before taking these ships on. 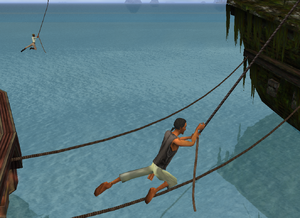 Retrieved from "https://piratesonline.fandom.com/wiki/Flagships?oldid=338373"
Community content is available under CC-BY-SA unless otherwise noted.