Firesting is a Dire Wasp Boss spotted in the Tortuga Graveyard and Wicked Thicket.

He appears at levels 6-10, attacking pirates with his stinger and wings. Firesting is not a threat to most pirates but can be a nuisance. 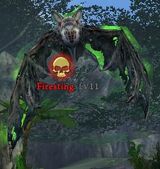 Retrieved from "https://piratesonline.fandom.com/wiki/Firesting?oldid=333240"
Community content is available under CC-BY-SA unless otherwise noted.