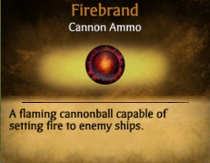 Firebrand is a special cannon round. They are blazing balls of fire that inflict moderate impact damage, but can also set a vessel on fire - thus causing continual damage over time; about 30 damage for every 2 or 3 seconds. Firebrand round becomes available at cannon skill Level 8.

Increasing this skill improves the damage caused, plus increases the amount of time the fire burns the enemy ship. Firebrand rounds can be purchased at any gunsmith.

To use Firebrand, be stationed at a cannon and press 4 or click

. Once three rounds have been fired, it will take several seconds to reset. You can improve your reload speed by using the Passive Skill Rapid Reload.

Below is a table of Cannon Damage and Fire Burning Duration for Firebrand:

In Ship PvP, firebrand rounds can also create a visibility problem for deck guns as fires and smoke rage on deck. It is also very effective for taking down sails.

With Ship Customization, when pirates reach Rank 4 Hull Upgrades, they can choose between 4 different upgrades. Two of these upgrades are the Fortune Hunter and the Firestorm upgrade. The Fortune Hunter upgrade starts out giving a 10% chance of a cannonball in a broadside being a Firebrand cannonball, while the Firestorm upgrade starts with 20%. If a pirate chooses to progress to Rank 5 or 6 in either upgrade, they will have an even higher chance of Firebrand broadsides.

Retrieved from "https://piratesonline.fandom.com/wiki/Firebrand?oldid=332501"
Community content is available under CC-BY-SA unless otherwise noted.