Fire Bats are powerful and frightening creatures. They almost seem ghostly as they flutter about, their bodies glowing. Compared to a simple Cave Bat, they are known to appear at levels 28-35.

What makes them so dangerous is not their regular attacks (bites and wings), which do only moderate damage. When they're killed - they EXPLODE!

The explosion deals considerable damage, as well as knock down any unfortunate blokes in range. This is similar to a Powder Keg Runner, fortunately not as long range or as lethal - but they should still be dealt with cautiously.

No one is sure why they explode or whether they may actually be completely supernatural creatures.

Fire Bats are known to give Cursed Blades on rare occasions. 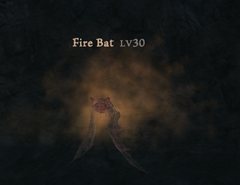 Retrieved from "https://piratesonline.fandom.com/wiki/Fire_Bat?oldid=334345"
Community content is available under CC-BY-SA unless otherwise noted.