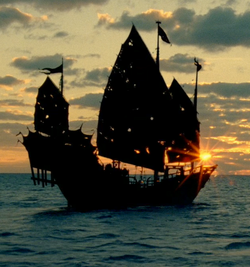 The Empress was the flagship of Chinese Pirate Lord Sao Feng.

It was used to ambush the crew of the Black Pearl following Jack Sparrow's escape from Davy Jones' Locker. Sao Feng had made a deal with Lord Cutler Beckett of the East India Trading Company, though he was persuaded by Hector Barbossa to turn against the HMS Endeavour in exchange for Elizabeth Swann. While the Black Pearl attacked Beckett's flagship, the Empress made its departure, bearing for Shipwreck Cove.

Beckett ordered the Flying Dutchman to give chase. During the battle Sao Feng was mortally wounded. He named Elizabeth Swann as captain of the ship, asking her to go to Shipwreck Cove in his place.

Captured by Admiral James Norrington, the Empress was towed by the Flying Dutchman as it made for Shipwreck Cove. During the voyage, Norrington set the crew free, and sacrificed himself to allow Elizabeth and the crew to return to their ship. The Empress reached Shipwreck Cove, where Elizabeth, representing Sao Feng, was named Pirate King and vowed to go to war against Beckett.

The Empress was part of the Brethren Court armada that witnessed the battle around Calypso's maelstrom under Tai Huang, who later became officially her captain.

Retrieved from "https://piratesonline.fandom.com/wiki/Empress?oldid=337815"
Community content is available under CC-BY-SA unless otherwise noted.