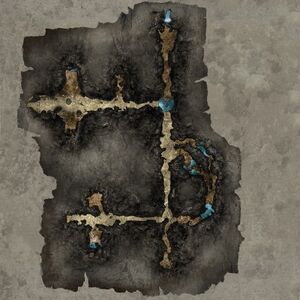 El Patron's Mine is inside a cave on Raven's Cove. It can only be accessed from a mine shaft elevator that requires a key. The key is obtained by completing the Raven's Cove Story Quest.

The mine is the home to various types of blood-thirsty Ghosts. These malevolent spirits (Mutineer Ghosts, Devious Ghosts, and Traitor Ghosts) will make every effort to stop any pirate. A few will actually become allies. These Traitor Ghosts must be protected from the others in order to complete the quest of El Patron.

The Mine is also home to Cicatriz, a Ghost Boss. She once led part of Patron's crew but now takes up residence at one of the totems - accompanied by several ghostly crewmen.

Besides the faceless ghosts of the former crew, two other spirits are trapped here. One is Dr. Bellrog, an explorer who died while hiding in the mine. The other is Kudgel, his faithful bodyguard.

You have to kill him later in the quest because they try and use you to get into the depths of the dormant volcano holding the marvelous, but scary ship of El Patron.

As part of the Raven's Cove quests, the pirate must locate several grave markers inside the mine and contact the spirits of those buried.

Pirates will also need to find journals buried by the graves.

Note: Dig spots do not show after completion of the story quest, the screenshots below show an area in which the dig spot should be located at.

Also, the following screenshots contain spoilers, if you do not wish to learn locations of dig spots for the quest, do not continue!

Below is the soundtrack played while in El Patron's Mine.