This article is about the weapons' cache. For the quest, see El Patron's Lost Weapons (quest) 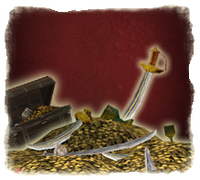 Apparently, El Patron (Meaning 'the boss' in Spanish), was in the islands to conquer and explore. There's little information about the weapons, or specifically what makes them El Patron's weapons, but rumors are that they are very powerful, possibly including the Lost Sword of El Patron itself!

Word of these caches reached Jolly Roger, who not only wanted the weapons for himself, but he wanted to make sure these items could NOT be used against him. So far however, the direct approach has not been working. His previous invasions have not uncovered anything. He turned to Rott, with his great success in hiring pirates to remove the amulets of protection from Port Royal. Ezekiel Rott brought out dupes to find the location of the weapons. They were slowly turning on the EITC, and ultimately found that the location of the weapons was not in Padres, but in a mysterious island named Raven's Cove.

Cutler Beckett of the East India Company, who made the mutual alliance with Jolly Roger - which gave their men magic powers, and the Undead access to attack pirate havens - brought down this alliance after hearing of its whereabouts. He immediately launched a Sea Offensive, as a premonition of his next plan - the imperial Expedition Fleets. The Expedition Fleets were Treasure Fleets that were sent to find Raven's Cove. Unfortunately, pirates with the aid of the Marceline Guild, rebelled till the Fleets gave up. After several unsuccessful attempts, a fleet of the company reached Raven's Cove.

The EITC Black Guard landed in the island to search for the weapons, only to find their old ally there:

The weapons were spread among the enemies of pirates. They can now sometimes be found when an enemy is killed and they are dropped in Loot Pouches, Loot Chests, or Loot Skull Chests.

The cache of weapons are now making their way across the Caribbean and many pirates and their enemies are getting their hands on them.

New versions of traditional weapons - Cutlasses and Pistols - were added, along with weapons that pirates didn't use before (according to Game Play) - Muskets, Sabres, Blunderbusses, Broadswords, and Bayonets. These weapons could for the most part only be found in loot drops while other Common versions of them are found in shops.

Weapons like Daggers, Voodoo Dolls, Voodoo Staves were initially sold among Blacksmith and Gypsies. However later, higher versions of Dolls appeared in the game, with the storyline that Tia Dalma and other gypsies had crafted them, and that they were looted among enemies. Higher Daggers along with Throwing Knives were introduced also soon with the storyline that the Abu Nar Clan had brought them into the Caribbean. It is unknown when the stronger Voodoo Staffs are going to be released.

NOTE: Basic access members can get all the kinds of weapons (Crude, Common, Rare, Famed and Legendary) but can only equip the Crude versions of Cutlass, Sabre, Pistol, Blunderbuss and Voodoo Doll. There are no Crude versions of the Broadsword, Musket, or Bayonet.

Famed items have a blue background. They are wanted by pirates like a kid wants sweet candy. They range from attack 25 (Orangutan Repeater) to attack 95 (Blightfang Edge), and they each harbor special moves. These were El Patron's most powerful weapons other than the Legendary weapons.

One of the weapons rumored to be among the cache is the Legendary Lost Sword of El Patron. This cutlass was said to be cursed with El Patron's dying breath and that the person who wields it will become a ghost as long as the weapon is in their hand. It has 84 attack power, Ghost Form Rank 3 Weapon Skill, Drain Voodoo Ability Rank 3, and a Sweep Boost +3.

Retrieved from "https://piratesonline.fandom.com/wiki/El_Patron%27s_Lost_Weapons?oldid=323867"
Community content is available under CC-BY-SA unless otherwise noted.