El Patron, also known as Humberto Diaz, was originally a Spanish Conquistador who visited the Caribbean many years ago in search of treasure and power. His greed was insatiable; conquering his way across the islands, always looking for more. It was never enough for him. It consumed him and eventually was his undoing.

Humberto was the son of a wealthy merchant and adviser to the king of Spain. But, Diaz wanted to make a name for himself and he would hear the tales from the New World of vast treasures to be discovered. Using his powerful connections, he financed a lavish expedition to the Caribbean. Like the many Spanish Conquistadors before him, he set out to find his fortune in these mythical new lands.

Gathering a large force for such a journey, he also gathered a large stockpile of weapons to arm them with.

After many months of travel, Diaz set up a base of operations on the island of Padres Del Fuego. He and his men began conquering many nearby islands. But soon had spent even the large sum supplied to him by his father and the king. At first, he used some of his weapon cache as collateral to borrow from local shopkeepers.

It said Patron's lust for power drove him mad. When he heard word of the powerful weapons crafted by Davy Jones' crew of the Flying Dutchman, he led daring raids to steal some of them for himself. Only too late did he discover they were Cursed, and his ship was pursued by an enraged Jones and the Kraken!

Unable to return to Padres, Patron turned West and discovered Raven's Cove. El Patron refused to give up his newfound weapons, and sealed them, along with himself and his remaining loyal crewmates in the mines.

As the days wore on, a group of mutineers led by his old friend Foulberto Smasho, rose up in mutiny. Foulberto's grudge against Patron's other officer, Cicatriz, and the crew's fear of being trapped on the island forever drove them to betray their Capitan. The mutineers took a portion of the weapon cache (mostly daggers and knives) and led into the caves. In revenge, Patron ordered the cavern sealed up - leaving them to their fate. This became known as the Cave of Lost Souls.

After the failure of the first mutiny, a second mutiny was spearheaded by Cicatriz in an attempt to save herself and the rest of the crew from death. This uprising failed too, however, and Patron and his once-loyal right hand woman were sealed on his ship and in the mines respectively.

Eventually, all of the conquistador's troops would face the slow death of starvation - trapped on a lonely island while the Kraken awaited them just beyond.

When he left without repaying his debt, the legend of Patron's weapons grew, until both Jolly Roger and Lord Beckett thirsted to harness their power. As word of these caches later reached Jolly Roger, he not only wanted the weapons for himself, but he wanted to make sure these items could NOT be used against him.

Soon members of the Casa de Muertos guild led by Ezekiel Rott (who was in league with Jolly) arrived on Port Royal and began asking any pirate they met to help them locate El Patron's Lost Weapons. Jolly was competing with his old ally Lord Cutler Beckett for these artifacts. Just as the Casa de Muertos did, Beckett received word that the weapons were not on Padres at all, but on a mysterious island called Raven's Cove.

Soon, Beckett launched Expedition Fleets to the Cove. At first, many pirates warded these fleets off - fearing Beckett was moving against them but also to plunder their cargo holds. However one of the Fleets reached the island, only to find Jolly's men already there.

Jolly Roger and Lord Beckett's forces fought a bloody battle over the weapons - with the poor settlers of Raven's Cove caught in the middle. Many an innocent would lose their lives in the struggle for power. Now that so many have plundering the weapons cache, they can be found everywhere in the Caribbean.

The Quest for the Cursed Blades 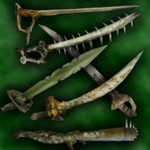 With Jolly Roger creating a naval blockade of rum to lure Captain Jack Sparrow out, the wily Sparrow hired other pirates to search for the Cursed Blades of El Patron for him, so that he could vanquish Jolly Roger once and for all. As the pirates found their way into the landlocked cavern where lay El Patron's Ship, they faced El Patron himself and the last remaining loyalists of his crew. He was defeated and the cursed blades were retrieved.

However, the "Curse" on these weapons is yet to be known. Some believe they may act like the Black Spot, allowing Davy Jones and the Kraken to track those who carry his stolen relics.

Originally, El Patron was only mentioned when theTreasure Fleets update was released, as the owner of a cache of lost weapons, which were said to be located on Raven's Cove.

Later, he becomes the last enemy to overcome in the Raven's Cove Story Quest, along with his crew of ghosts that the pirate must fight in the boss battle on his ship. He attacks with a Broadsword and has a health meter of 18,750 HP, and even possesses Blade Storm. If he is defeated, the pirate gets to choose one of three cursed blades and an evil curse emote. He is also the first and only enemy to use a Broadsword. He was the toughest land boss before the introduction of Foulberto Smasho.

El Patron seems to be wearing a Bronze Cabaset that can only be purchased by Privateer Merchants.