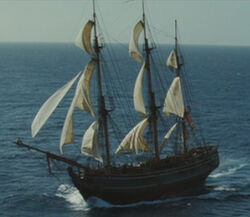 The Edinburgh Trader was a 169-foot-long merchant vessel owned and operated by Captain Bellamy and his crew.

The ship was docked at Port Royal following Lord Cutler Beckett's arrival, and launched for the open water after Elizabeth Swann escaped from Beckett's custody. Swann stowed away aboard the Trader, disguised as a crewman, intending to reach Tortuga. To this end, she played on the superstitious nature of the ship's crew, using her wedding dress like a puppet to make the sailors believe the ship was haunted. She was ultimately able to persuade the Captain to head for Tortuga. While there, the crew made a tidy profit "off the books".

Later, back on the water, the crew picked up Will Turner, having escaped from the Flying Dutchman. However, Davy Jones set the Kraken after him, and the legendary leviathan rose from the depths and attacked the Edinburgh Trader.

The vessel was completely destroyed, and the crew killed or drowned. Will Turner was the sole survivor.

This vessel does NOT appear in Pirates Online, it is here merely for Lore and background information. Given the game's timeline, which takes place between the 1st and 2nd films, the vessel has not yet been lost.