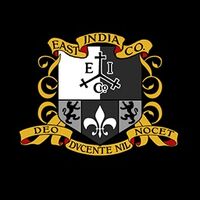 The East India Trading Company or the EITC is the fictionalized version of the English East India Company in the Pirates of the Caribbean series. In the islands, the 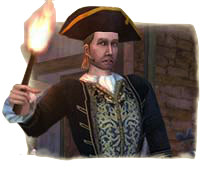 company is headed by Lord Cutler Beckett. They consist of ships and enemies.

The East India Trading Company was granted a Royal Charter of Queen Elizabeth I on December 31, 1600. It has since become one of the most powerful commercial enterprises in existence.

East India's banners proudly displays their motto, "Deo Ducente Nil Nocet" or "When God leads, nothing can harm us."

This crest is seen on the flags of their fleet flagships. A simpler E.I. Co. logo is branded upon shipping containers

The East India Trading Company's business is mostly centered on India, where it also acquired auxiliary governmental and military functions which have come to overshadow its commercial activities. In India, the Blue Coats protect the company.

With the importance of Caribbean customers and its position as a rest stop for many of the company's ships it has become necessary to employ more force where the Royal Navy "falters".

To that end, Cutler Beckett began using controversial methods to control trade routes and using more shows of force to quell pirates. This however incurred political resistance from residents of the Caribbean and more resistance from those who viewed the company as an authority figure threatening their freedom.

With the destruction and quick rebuilding of Port Royal, Tortuga, and the volcanic island of Padres Del Fuego, whispers circulated the EITC was stockpiling gunpowder for some form of assault on pirates operating in the area.

Also, numerous pirates had encountered Black Guard members offering rewards to any who aid them in their pursuit of the Marceline Guild following a massive ship battle against their blockade around Padres Del Fuego that resulted in a large number of their vessels being sunk.

To add to the paranoia, buccaneers now fear that the EITC walk among them in disguise.

After a massive naval confrontation with pirates off Padres Del Fuego, agents of the Black Guard were in pursuit of those who led the assault. Soon, word spread Beckett had brokered a deal with the cursed Jolly Roger himself to aid his war on piracy - in trade for Roger's desire to get revenge on Captain Jack Sparrow.

"We fought the EITC scabs at the Battle of Padres. Lead by the infamous Marceline Guild, we managed to hand them a serious defeat. Their Commander, Lord Cutler Beckett, sent in his elite Black Guard Troops to jail the ringleaders of the rebellion. As pirates, we forgot our differences and banned together to fight off the Black Guard. But, during our encounter with them it was obvious we could do the Black Guard no real harm. The gypsies and soothsayers heard rumors that confirmed what most of us suspected; the EITC were immune from our steel due to voodoo magic! Seems that Lord Beckett and Jolly Roger were working together! Jolly now has what he wants - a willing partner and access to land."

East India had indeed helped Jolly Roger in his Invasions, as he helped them in return. But this alliance was soon to fall.

As part of Beckett's continued War on Piracy and in his dealings with Jolly Roger, some new information about El Patron's Lost Weapons came to his attention. To find these stashes, he dispatched special fleets of warships to retrieve them. These Expedition Fleets were led by the company's massive Ships of the Line and posed a serious threat to all pirates. After many failures to reach the mysterious location - Raven's Cove, one fleet finally managed to make land. The Company's soldiers had reached the island, only to find the cursed army of Jolly Roger there as well. A battle lasting two days was fought resulting in many losses on both sides, but each took of a large amount of the weapons booty for themselves.

Since both sides managed to claim some of the cache, Beckett has been moving the plunder to other East India strongholds. And now Treasure Fleets have been spotted carrying their spoils along the trade routes.

The East India Trading Company are portrayed as a Major Enemy for pirates. In this case, a force of capitalism run amok as the corporation seeks a monopoly of all export and import among the islands.

The main strength of the EITC is its inquisitive soldier force - the Black Guard. They are primarily thugs and assassins that work for the company. The Guard is headed by its GM leader Captain Ellison Shaw.

All EITC ships and soldiers for hire are colored black and grey and are much stronger than their Royal Navy counterparts and more aggressive. They will quickly move to attack any pirate or pirate vessel they encounter.

They openly work beside Navy soldiers and have established outposts on many of the islands, even Tortuga, which is a "free" island to pirates.

They primarily use daggers and swords.Their more elite units carry finely made weapons, rumored to have been crafted by the mysterious Abu Nar Clan. 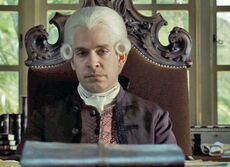 The Company itself is under the direction of Lord Cutler Beckett. The authoritarian has been granted a title and license to do as he pleases to develop the Caribbean for England. Though he is seldom seen, his influence can always be felt; from the intimidation of the Black Guard to the pitiful prisoners laboring inBeckett's Quarry.

He is leaving his mark on the islands.

Beckett wages an almost personal War on Piracy, trying to restrict all free trade and the hunting down of any free booting sailor who dares raise the skull and crossbones. It is the intended goal to control the seas and thereby monopolize nearly all trade. To that end, he will use whatever means necessary, even striking deals with such monstrous fiends such as Davy Jones or Jolly Roger.

Beckett has assigned some of his most dangerous men to work in high-priority locations. They are not to be taken lightly.

Some of East India's most trusted soldiers have been given a permanent station, usually inside a fort or outpost.

Other members of the Black Guard can appear at any time, any place, standing in for a regular soldier.

The lowest of the low, but even these scurvy ruffians can still be dangerous to a greenhorn pirate.

Modestly trained with some battle experience, these fellows might put up more of a fight.

As the name implies, these soldiers are specialists and more capable than the regular East India rabble.

These cold-blooded killers should be avoided lest you're a very skilled pirate.

Typical East India Black members are little more than well-dressed goons hired out of taverns or ex-military men. But, some are highly skilled and trained operatives. All are dutifully loyal to the company. 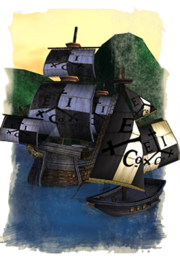 Vessels belonging to the EITC pack more firepower and have heavier armor than Royal Navy versions. They are designed to fend off pirate attacks on their own without escort ships.

These light ships tend to stay close to the EITC's interests at Port Royal and Tortuga.

Note - The Sentinel is the only LIGHT vessel to carry Firebrand.

Unlike Royal Navy ships, these vessels pack Firebrand ammo and aren't afraid to use it in protection of their cargo. They can be encountered most often West of Port Royal and around Padres Del Fuego.

These powerful ships give even a veteran crew goosebumps. They shoot Firebrand ammunition and can be found in and around Padres Del Fuego, Outcast Isle, and Isla Tormenta. The Barracuda can also be a flagship.

Undoubtedly among the most daunting floating arsenals on the seas. These ships stand as symbols of the EITC's might on the waters. They shoot Firebrand and Explosive round ammunition and can be found in and around Padres Del Fuego, Outcast Isle, Cuba and Isla Tormenta.

Originally, the Behemoth used to be a flagship. These are commonly found in Mariners Reef, on the port side of Padres del Fuego, and between Outcast Isle and Tormenta (The side of Tormenta opposite Cuba).

Ships of the Line

Recently, the East India Company has begun to use massive Ship of the Line class vessels to head their Expedition Fleets. They out-class anything currently at sea, taking the crown of most intimidating enemy vessel away from the heavy warships. To make matters worse, they are escorted by Tyrant class war ships.

Game Note-The Ship of the Line have Royal Navy counterparts

With their heavy political influence, the EITC often have members of the Black Guard stationed at Navy forts as well as their own hideouts.