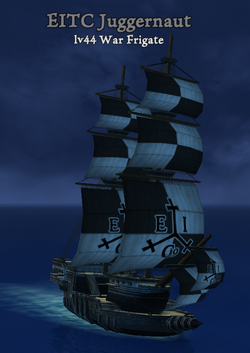 These heavy War Frigates are the pride of the East India Trading Company fleet. This vessel carries seven deck cannons and 10 broadside cannons on each side. They appear at levels 42-45. The Juggernaut is one of the single most imposing vessels on the high seas; even the most notorious pirates will never take a Juggernaut lightly.

This vessel is comparable to, yet more powerful than, its Navy counterpart, the formidable Royal Navy Dreadnought.

They attack with powerful Firebrand ammo on their deck cannons, and also deploy a very powerful broadside of Explosives. It can be found anywhere in uncharted waters, or outer sections of each outer islands seas.

They are not part of any Quest.

Retrieved from "https://piratesonline.fandom.com/wiki/EITC_Juggernaut?oldid=322801"
Community content is available under CC-BY-SA unless otherwise noted.