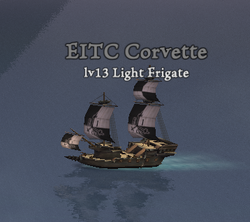 The Corvette is a Light Frigate in service of the East India Trading Company. This vessel carries four deck cannons and five broadside cannons on each side.

They are often found in the safer waters between Port Royal and Cuba as well as sometimes near the privateering islands, even going as far as Kingshead. They can appear as flagships with crews made up of Thugs and Grunts. Depending on the attackers, they might even be captained by EITC Mercenaries and minor bosses.

The flagships are often found sailing between Kingshead and Outcast Isle and give relatively good cargo.

They attack with Round Shot and Chain Shot ammo. They appear around level 14 with around 5,400 health points.

Retrieved from "https://piratesonline.fandom.com/wiki/EITC_Corvette?oldid=323433"
Community content is available under CC-BY-SA unless otherwise noted.