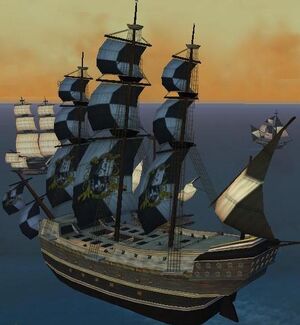 The Conqueror is a massive Level 79-81 Boss Ship of the Line in the service of the East India Trading Company. It is one of the most powerful ships in the Caribbean. In addition to being a powerful vessel in its own right, this ship is always accompanied by a group of EITC Tyrant escort War Frigates in the Treasure Fleets.

The Conqueror can fire broadsides of Explosive and shoot Chain Shot ammunition from their deck cannons. It has tremendously thick hull armor. It can engage targets from fairly long range, are surprisingly fast and agile for their size.

Currently, these ships have only appeared as part of Treasure Fleets and Expedition Fleets and have no permanent patrol routes.

Retrieved from "https://piratesonline.fandom.com/wiki/EITC_Conqueror?oldid=326833"
Community content is available under CC-BY-SA unless otherwise noted.