Avoid these blaggards unless you're ready for a nasty fight. These elite mercenaries are in the employ of the East India Trading Company, and they obey their own laws -- or rather, the laws deemed convenient by Lord Cutler Beckett, the ruthless guiding hand behind the EITC." - Pirates of the Caribbean Online 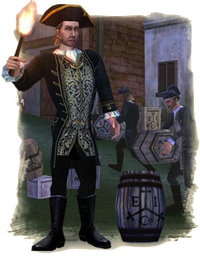 Many are former soldiers, some just well-dressed and well-trained goons. They originally guarded East India Trading Company cargo and facilities, but Beckett now uses them to carry out his whims. These minions are his pawns in his plans to get rid of Pirates once and for all. Lately, some pirates have noticed other pirates are secretly working for Beckett. Some players have been known to have dealings with Beckett and his Black Guard.

The Black Guard is based off the large European trading companies' private armies. The actual largest standing army ever fielded was by the Dutch East India Company, or Vereenigde Oost-Indische Compagnie (translates to United East Indian Company in Dutch, and is abbreviated VOC). This was also the largest army in the world at this time. The title was picked up by Britain with the formation of the British Empire, with soldiers serving on 6 continents. The Black Guard receives its direct inspiration from the East India Company, a British trading company that was responsible for occupying many lands under British command and for crushing any pirates that could potentially threaten trading activities. This army was the largest privately-owned army from the colonization of India onward until the nationalization of the company after the Sepoy mutiny of 1857.

In reality, there were few East India Company soldiers in the Caribbean compared to the rest of the world. Of course, during the Golden Age of Piracy, the law was hard to enforce and the East India Company had to protect its interests in sugar, rum, tobacco and other products.

The Black Guard have a variety of ranks, each more dangerous than the last.

These are some of the most dangerous foes you will encounter; beware these blaggards and show no quarter (mercy).

These are the game's East India Trading Company role-played characters and are most famous for their pirate interrogations in 2009 - known as The Black Guard Cometh event - around the time of Port Royal's destruction and rebuilding. However, they still show up, even during Jolly Roger's Invasions (There was a particular face-off recently between Captain Walter and the EITC Black Guard's leader Captain Ellison Shaw).

To prevent disruptive players from causing problems at events, the Black Guard has the power to stun or Knock Out a troublesome pirate. 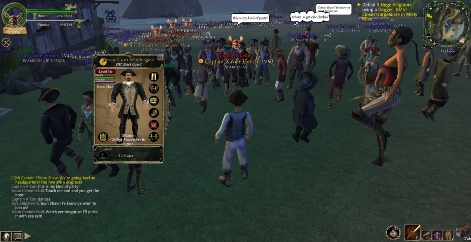 These Game Masters were in the guild "EITC Black Guard":

At one point, they began to question pirates about their involvement in the sinking of Expedition Fleets, on the beaches of Tortuga.

The Black Guard are spread all throughout the Caribbean, sometimes even in secret or tucked away locations.

For the Valentine's Day Quest, pirates visit Erin Amorous, who is dressed in EITC garb. It was later confirmed that he is actually a pirate in disguise.