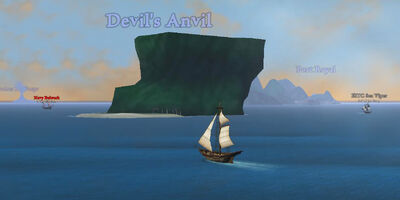 Below is the soundtrack that is played while on Devil's Anvil.

Devil's Anvil is a small, rocky island between Port Royal and Tortuga whose shape roughly resembles that of a giant blacksmith's anvil (a large iron tool for working metal that a blacksmith uses to beat the metal). This island is where Captain Hector Barbossa and his pet, Jack the Monkey, reside. It is currently the safest wild island in the game, because the most low-level enemies are found here, despite the Rock Crabs.

It is believed to be rarely visited besides by beginning players, because Devil's Anvil can cause bad luck. Some say people have visited this isle and never came back. However, players 1-5 like to come here and battle, and others like to beat down crabs until they find a boss, and some people come here for quests.

Barbossa gives new pirates their first pistol and teaches them how to use it. He also talks to them about pirate vs. pirate (PvP) combat, and using the cursed Aztec coins to keep from dying. It is similar to the Isla de Muerta, and could possibly have been based on it. Barbossa's Grotto (the island's cave) also has an Infamy Rewards merchant, Leon Warhawk. 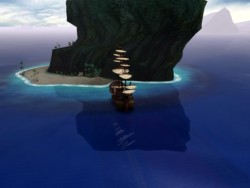 A handful of small critters scuttle around the beach area. Mostly, they are an annoyance to visiting pirates, or good target practice.

Retrieved from "https://piratesonline.fandom.com/wiki/Devil%27s_Anvil?oldid=322474"
Community content is available under CC-BY-SA unless otherwise noted.