The Darkfire Cutlass is a special item offered by Redeeming a Code. This Rare Cutlass has a distinctive Cursed Fire ability that lights the blade with green fire. This is one of only four swords, (others being the Nemesis Blade, Sword of Triton, and Spectral Cutlass) that don't have a level requirement.

This is one of two non-cursed swords that has Cursed Fire ability. It is unknown why this sword isn't considered as a Cursed Blade. This sword has the weakest attack power of all the rare cutlasses in the game.

It could only be obtained through the Redeem Code DARKCUTLASS 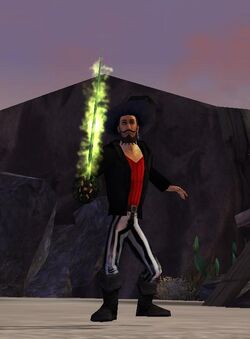 This sword was brought back for a short period of time as an apology for the week of data loss. On February 18, 2011, it could be redeemed with the code darkcutlass - but once again expired April 1, 2011. It was added back August 23, 2013 for the game's closure.

In The Legend of Pirates Online, several Game Masters attending the re-opening of Cannon Defense offered the code darkfire to attending pirates.

Retrieved from "https://piratesonline.fandom.com/wiki/Darkfire_Cutlass?oldid=336139"
Community content is available under CC-BY-SA unless otherwise noted.