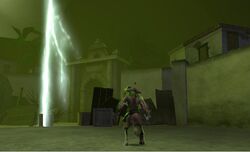 Dark Thunderbolt is a very powerful Voodoo Hex used by Jolly Roger. He has been witnessed using it against pirates fighting him during Invasions. This attack used to be an actual hex available for staffs in 2007, but was replaced with Pestilence. It has a VERY long range, striking pirates as immediate reprisal for attacking him. It strikes with deadly accuracy (the chance is smaller if there are many pirates attacking Jolly Roger at the same time). Victims can be struck by damage ranging over 2,000 health points in a single blow. The amount of damage done depends on the number of players taking part in the invasion. The greater the number of attackers, the higher the damage received.

This attack also deals a burn duration after the initial damage is inflicted, causing continuing damage. It is possible to survive a Dark Thunderbolt, but you'll have to be either high-leveled, or just really lucky.

GAME NOTE: It is similar to Cursed Thunder, but a lot more powerful.

Retrieved from "https://piratesonline.fandom.com/wiki/Dark_Thunderbolt?oldid=328705"
Community content is available under CC-BY-SA unless otherwise noted.