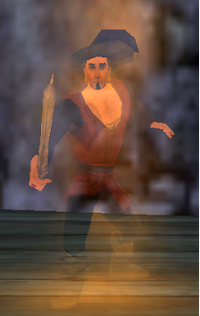 Dark Curse is a defense oriented hex that halves the damage received from incoming melee and ranged attacks. While in this form (Although not stated on skill description) gives the user a 20% attack boost for the duration of the effect. Very similar to the Lost Sword of El Patron's Ghost Form. Unlike Ghost Form, Dark Curse lasts for 20 seconds instead of 12, and changes your pirate into an orange Ghost instead of a green Ghost.

Dark Curse is a Break Attack, only charged when you take damage and perform perfect combos.

Weapons with this skill