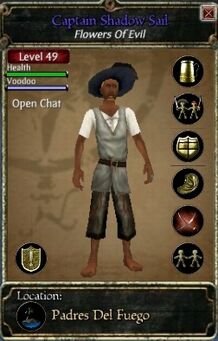 A D-Name (Disney Name) is the name given to a player's account with Disney Online, as opposed to their pirate's name. The D-Name is associated with ALL pirates under their account.

Originally, it will appear as, for example, "Guest1234567" - always beginning with "Guest" and ending with several numbers. You can change this to something that is appealing to you by going to "Manage Account" on piratesonline.com. It will pend for approval by a moderator. Once your D-Name is approved, it cannot be changed.

You can request to be someone's Player Friend by clicking on the two skeletons holding hands on the bottom of their Player Card (shown in picture), similar to befriending a player's Pirate. Player Friends allows you to be friends with a player's account. You can even see what Pirate your Player Friend is using.

Retrieved from "https://piratesonline.fandom.com/wiki/D-Name?oldid=323748"
Community content is available under CC-BY-SA unless otherwise noted.