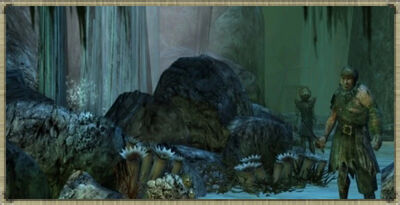 The Cursed Caverns, found on Isla Tormenta, is a cave populated with wrecked vessels and some of the most dangerous enemies a pirate can face: the crew of the Flying Dutchman.

Surely, this is a cursed place - only the bravest or most fool-hardy dare tread, but at some point a pirate must come here in order to complete the quest to free The Black Pearl. However, many higher level pirates frequent here with hope to find cursed blades.

Though doomed sailors are offered a chance to serve Davy Jones instead of being taken to the other side, their time aboard the Dutchman corrupts them. They become less and less human, and more and more a part of the ship itself. As they change, they also become more brutal and ruthless.

Hint - One way to make it easier is to have a much tougher mate or several mates go in and then teleport to them. Get the key and teleport out.

The Cursed Caverns is basically a limestone cavern filled with moss, ferns and sea wreckage similar to that of the Flying Dutchman. It also has underground water streams that appear frequently throughout, coming from walls as waterfalls or stagnating in areas. The cave has a greenish atmosphere, giving it the Flying Dutchman creepy look, but this feeling is dropped when the bright blue water is spotted.

In these stagnations of ground water, many Spineskulls or Flotsams can be found, from the start of the cave to its center. At the second junction, if a left turn is taken, several dagger throwing Kelpbrains are found. On the left-hand bottom side at the sudden and narrow hard turn, several Brinescums can be spotted. Further along this corridor is the famed Gold Room, guarded by Seabeards and Molusks.

Travelling to the right hemisphere of the cavern, you will encounter several powerful Seabeards and Molusks. Going further right, the player enters a large room filled with water that some have accurately nicknamed the Deadly Hollow. This area is filled with the some of most powerful land enemies encountered yet - Urchinfists and Thrall Captains.

For further reference, see the map below. 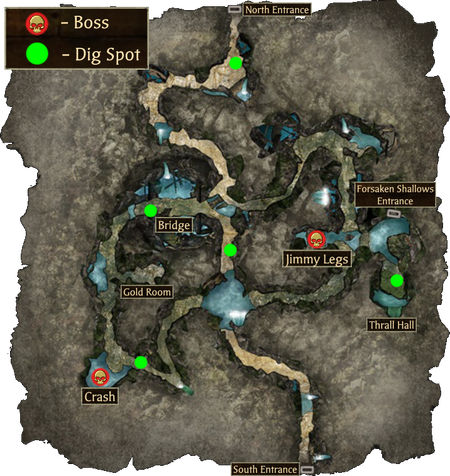 Retrieved from "https://piratesonline.fandom.com/wiki/Cursed_Caverns?oldid=338147"
Community content is available under CC-BY-SA unless otherwise noted.