The Cursed Blades of El Patron are cursed weapons that were once used by Captain El Patron himself. There are three of them, and Jack Sparrow wants players to retrieve them for him to vanquish Jolly Roger and end the rum blockade he started, in the Raven's Cove Story Quest. There are three blades, and they will be found in a Loot Skull Chest after El Patron is defeated in his boss battle which are Bitter End, Spinecrest Sword, and Nautilus Blade. They can be found again in loot from Raven's Cove and Isla Tormenta.

Game Note: Players are only allowed to take ONE of these blades after defeating El Patron, but can get them from loot later on as well. 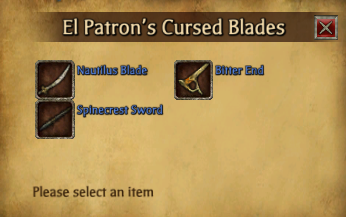