Every night when the moon be at its fullest, anyone who walks on land that be touched by moonlight be "cursed", and becomes undead! 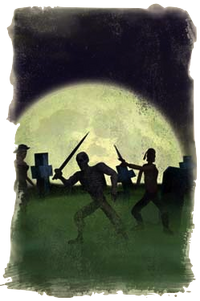 Jolly's insidious plan was unleashed on the islands by All Hallow's Eve, and for many horrific nights, pirates found themselves in massive sword and gun battles with their fellow buccaneers, shipmates, and even fellow guildmates who fell victim to this evil curse!

"As we all know, All Hallows' Eve is a powerful day. It's a day the dead are said to rise and visit with the kin they left behind. Only this year, a terrible thing happens on that very day - a full moon - and Jolly Roger be working to summon all his magic to curse the Caribbean for his gain.

Them that's caught in the fray will be forced to attack towns ... and each other! Chaos will overtake me beloved islands and Jolly Roger's joy will be full as cursed Pirates fight for his unholy cause! At least, that's what the Mermaids done whispered - properly warned about the curse ye be.

When will this terrific mayhem befall the Caribbean? As the curse tells, starting October 31 - but how long will it last? That mystery is still to be unraveled ...

So take care mate, if yer indoors the curse won't touch ye. Why? The scuttle be that Captain Jack got wind of Jolly's plan and took somethin' he needed to make the curse complete. Ole' Jack stole an ancient Aztec relic called - The Moonstone - from one of Jolly Roger's henchmen. Now, his curse can be broken and only affects those on land, not at sea - so there is hope.

Once the moon wanes, everyone indoors must come out and defend the towns against the undead! For if ye defeat an undead Pirate, it be a favor, it is. He lands in jail and returns to his natural state after a bit. And if enough cursed Pirates be defeated, we'll have saved the Caribbean from Jolly's curse. So do yer duty, watch yer back ... and pray for clouds." - PiratesOnline.com

It's not truly known how the curse was lifted, but the rumors have it that Captain Jack Sparrow had something to do with foiling Jolly Roger's plot. Whether the curse is truly gone remains to be seen - but this doesn't mean that the wily specter isn't hatching another plan. This involved going to new alliances. He started one with Lord Cutler Beckett as he watched the EITC 's destruction of the main islands, and helped the Company in its aftermath. 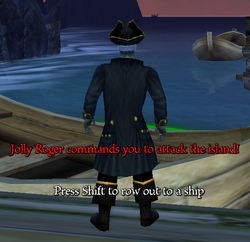 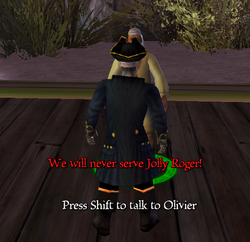 During the curse, when the moon in the sky appears full, any pirate not on a ship at sea, or indoors would turn into an undead skeleton just like in PvP. Unfortunately you do not get PvP Infamy when you defeat a pirate.

When a pirate becomes undead, the Pirate's Code is openly broken. Pirates can attack their undead friends, even with guns. It's understood that pirates are free to defend themselves against those that turned by any means necessary.

While undead, a pirate may not launch a ship, talk to NPC, enter a building or teleport.

If killed while undead, the pirate would not be given the chance to be revived and awaken in jail. Undead pirates then return back as a normal human. This would continue until the moon had passed or they have been freed by death. The moon takes 15 minutes to pass. If a pirate is knocked out by an Undead, they can still be revived by other pirates.

If killed by a NPC during the moon, that pirate can still walk around attacking until the knock out timer runs down completely.

Fearing for their lives, citizens on the main islands locked their doors - so anyone outside couldn't bring the curse in with them. If you were outside when it struck, you were left to your fate. If you don't want to become a undead, stay indoors when the curse strikes. You will be safe on your ship as well.

The Curse appears every year for All Hallows Eve. The Muertos Moon however, does appear in the sky for every Invasion. Jolly's power increases on Friday the 13th as well, and the curse will rear its ugly head again then.

Be brave, be strong, be alive! The Caribbean needs you now more than ever! 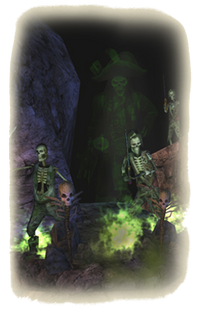 It’s the most supernatural month of the year, and powerful magic is already brewing Jolly dark magic throughout the Caribbean – including Jolly Roger’s own dark magic. As any Pirate worth his salt knows, ol’ Jolly grows deadly strong this time of year, and he’ll unleash his macabre mayhem upon the Caribbean any day now!

Jolly’s Curse of the Muertos Moon is known and feared throughout the islands. Any Pirate on land and outdoors who is struck by the cursed moonlight transforms into one of Jolly’s undead minions, with an inhuman thirst for battle!

If yer seeking safety from Jolly Roger’s vile curse, get aboard yer ship or indoors before the Curse strikes. 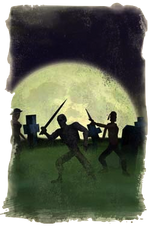 But once the Muertos Moon wanes, beware those cursed Pirates outside still under Jolly’s spell – or shatter his hex by defeating them!

WHAT: The Curse of the Muertos Moon
WHERE: Wherever cursed moonlight touches island land
WHEN: Anytime between now and All Hallows’ Eve

Look alive, mates! The Curse can strike multiple times in one day!

October brings supernatural new strength to Jolly Roger’s magic, and he plans to unleash his macabre mayhem upon the Caribbean very soon…

Ol’ Jolly’s Curse of the Muertos Moon is known and feared throughout the islands. Any Pirate on land and outdoors that is struck by the cursed moonlight transforms into one of Jolly’s undead minions!

Seeking safety from Jolly’s vile curse? Get aboard yer ship or indoors before the Curse strikes.
But once the Muertos Moon wanes, beware those cursed Pirates outside seeking to do battle under Jolly Roger’s spell! If enough cursed Pirates be defeated, you can help save the Caribbean from Jolly's blight.

The Curse can strike multiple times in one day – properly warned ye be, mates…

This year there was no posted schedule and the Curse occurred at more random times, in some cases even happening during Invasions, which obviously caused greater havoc as undead pirates ended up hurting each other in the fray (whether by accident or on purpose).

It is unknown yet about the event times this year, as the times change each year. Disney will always give warning on the Current News page about Muertos Moons, but may not be specific on times. 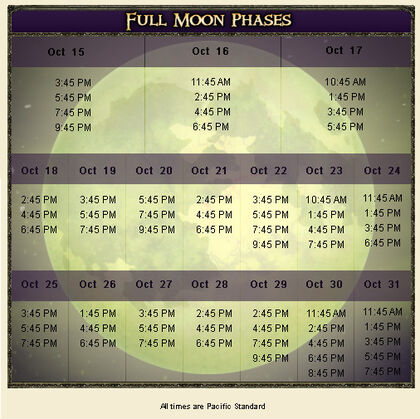 The tides are not the only thing affected by the full moon on All Hallows' Eve. Jolly Roger has worked his magic to bring a horrible curse to the Caribbean this Halloween Weekend! Any Pirate on land that is struck by moonlight will be cursed! While those that are at sea or inside are safe, for a time. Read more about the Curse of the
Muertos Moon.

Did you happen to notice that our one year anniversary falls on October 31 - or that in the Caribbean, October 31 also happens to be the night of a full moon? Indeed, it's a spooky coincidence.

In fact, All Hallows' Eve is measuring up to be a very strange time in the islands with tales of curses and all. To find out more about this curse, we met Host GM Captain Walter, who along with his crew, the Marceline Guild, have been warning Pirates of the ill winds coming toward the islands.... Full Moon Fever.

Spooky things are happening in the Caribbean this Halloween and the winds and tides be not the only thing affected by the full moon on All Hallows' Eve. Jolly Roger has worked his magic to bring a horrible curse to the Caribbean - and enslave all the Caribbean as part of his undead army - a curse that be prompted by a full moon.

To any Pirate that be on land and struck by moonlight they be cursed! While those that are at sea or inside, be safe ... for a time ... beware the full moon mates! And beware Jolly's undead army ...

Retrieved from "https://piratesonline.fandom.com/wiki/Curse_of_the_Muertos_Moon?oldid=338090"
Community content is available under CC-BY-SA unless otherwise noted.