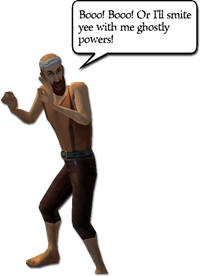 Crazy Ned (aka Edward Brittles) is a former miner in Raven's Cove. He seems to be the only living mortal left on Raven's Cove. He is constantly running and hiding from the hostile ghosts on the island. Ned has gone raving mad since no other living soul is around. In fact, he believes that he himself may actually be a ghost.

He only speaks in rhymes to pirates who encounter him. But, he holds the key to El Patron's Mine. To get the key, the pirate must perform quests for the various ghosts haunting the town. They will then tell Ned to help you.

At night, he is seen hiding inside a partially broken crate as the Rage Ghosts haunt the island.

Pete Abred has told pirates the story of Crazy Ned. He found a great hiding place from Jolly Roger. Due to being the only living citizen of Raven's Cove, he has gone insane. 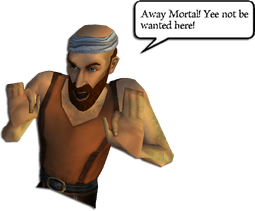 Retrieved from "https://piratesonline.fandom.com/wiki/Crazy_Ned?oldid=323719"
Community content is available under CC-BY-SA unless otherwise noted.