Constance Sorrow haunts the beaches and swamps of Tortuga. Before her untimely death, she was known as Constance Moses – the widow of Innocent John. Months after they married, John was snatched away in the middle of the night after being falsely accused of stealing a neighbor’s livestock. Constance was beside herself with grief and plead with the Navy men and town Mayor to free John – but her pleas fell on deaf ears. The crooked men that held John did mention that, for a price, the charges against her husband could be dropped.

Constance remembered John’s Aunt in England had some wealth, so Constance wrote to her for help. The Aunt wrote back that she would “sell her inheritance for her nephew’s release.” Constance was relieved and waited for the ransom to arrive, but when she learned the gold had been stolen, Constance fell ill. Innocent John, as he would come to be known, died by the hangman’s noose shortly after. Captain Cromwell was convicted and hung for stealing the gold, but Constance never recovered from the loss of her husband and died of a broken heart. But that wasn’t the end of it. Jolly Roger reanimated John Moses and he now serves in the Undead Army. Still haunted by these events Constance now roams the earth, looking for brave Pirates to defeat Jolly so she and John can be together and rest in peace for all eternity. Because of her constant grief, the townsfolk gave her ghost the name – Constance Sorrow. 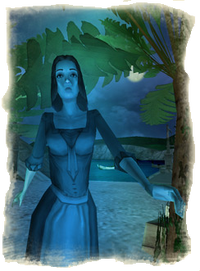 Soon pirates began to fight of the invasions of undead forces, and the soul of John Moses was rescued back and Constance finally reached him:

"Constance's ghost, known around the Caribbean as Constance Sorrow, haunted the swamps of Tortuga to warn others of Jolly's vile plans. And she begged Pirates to weaken Jolly's army in order to release John from his service. It worked. When Jolly Roger's invasions of Port Royal began, some brave Pirates drove the undead army back long enough to interrupt Jolly's spell over John, and John slipped away from this captors' boney grasp. Now, both John Moses and Constance Sorrow are released from haunting this earth, and are finally able to join each other in eternity. The Gypsies and soothsayers say the freed couple will reunite once more and depart this world... as one."

Constance made every effort to warn the pirates of the Caribbean to NOT take the offerings of Captain Ezekiel Rott and his guild. And even when it was too late, she tried to foretell when Jolly's next invasion would be.

When reunited with John, they both made the final journey to the other side. To continue to make amends, Captain Cromwell now fulfills her duty by giving the pirates fair warning of Jolly's next move. 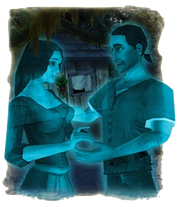 After efforts on behalf of numerous pirates to right Cromwell's wrong - John's soul managed to escape the clutches of Jolly Roger's service. Several were witness to an amazing spectacle as the two ghosts reunited in the burned remains of their once happy home. Together again, they made their final journey to the other side.

Constance was seen during the Feats of Strength Competition of 2011 and 2012 helping pirates for their next goal to win the race. She appeared at Level 23, and she was not in a Guild.

Though Constance and her husband crossed into the great beyond, she seems very appreciative of those pirates who helped reunite them and has already made appearance at events, such as the Jolly Roger Targets Pirate Ghosts event, to express that gratitude and help when she can. As a GM ally, Constance is likely to keep coming back to aid in the fight against Jolly Roger and Ezekiel Rott.

Retrieved from "https://piratesonline.fandom.com/wiki/Constance_Sorrow?oldid=330464"
Community content is available under CC-BY-SA unless otherwise noted.