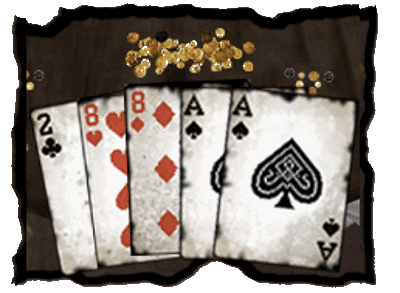 Part of being a pirate is putting the odds in your favor. When comes to gambling, having some Cheat Cards up your sleeve or in your boot can do just that.

In Pirates of the Caribbean Online, the player can partake in two card games of chance in island taverns: Poker and Blackjack. Another form of Poker, known as Undead Poker, can be done during the Raven's Cove Story Quest. Cheat Cards can be used in any of them, if you're willing to risk getting caught.

Often when defeating an enemy, the pirate may find a playing card among the loot; most often from an EITC, Royal Navy or Skeleton. Normally, the tougher the enemy - the better the card.

Black Mack in the Rowdy Rooster tavern in Port Royal will give you quest to win 150 gold. Return to him and he'll give you another quest to kill a skeleton. Then, come back for your free card.

You can repeat the quest and keep collecting as many cards as you like! Yes, you could potentially have all 52 cards up your sleeve at once!

Shane McGreeny in Port Royal's Royal Anchor bar also gives out three different quests, each of whose payoff is a cheat card. 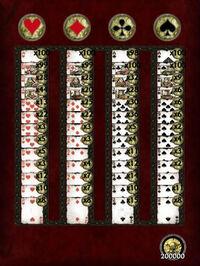 You can view your complete Cheat Card inventory by pressing I (Inventory) or Tab (Sea Chest) then clicking on the Card Icon to view the Cheat Card Deck (See image).

It is possible to own more than one copy of each card (with the max being 100 of the same card and a max of all cards being a total of 5,200 cards).

And while a good honest game may be hard to come by, nothing says a little extra something up your sleeve wouldn't hurt?

Pirates can Swap cards while playing Blackjack or Poker in the taverns to improve their odds. Using a Cheat Card does NOT guarantee you'll win, however - except with a Blackjack (21).

During the pirate's turn, the game will prompt for them to Swap Cards. If the pirate chooses to swap a card - they then choose the suit and value of card - from those in their possession. A card swap may fail. If so, the game continues anyway. But you cannot swap cards again for the rest of the round and that card is lost.

If the pirate swaps for a card that ends up in play by another pirate or the dealer - they are caught cheating. Any gold won during that sitting will be lost, the player will be fined 100 gold, and the pirate is immediately sent to the nearest jail, but you will not be groggy upon waking up. A message will announce you've been caught.

Retrieved from "https://piratesonline.fandom.com/wiki/Cheat_Cards?oldid=338421"
Community content is available under CC-BY-SA unless otherwise noted.